In 2018, the Asia cup match was held in UAE (United Arab Emirates), and India won this match by defeating Bangladesh by 3 wickets. After this match, it was decided that the Asia cup 2020 would be held in Pakistan.

But, because of some political tension between India and Pakistan, India was not participating in the Asia cup 2020. 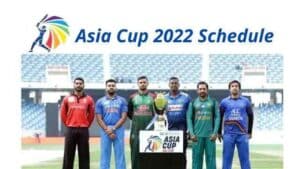 India had imposed a condition of withdrawing from the game. But, there was no impact on the match. ACC (Asia Cricket Council) was stuck with its decision to hold the Asia cup 2020 in Pakistan. The council’s decision was not met with a favorable response from India.

After some discussions, Pakistan has proposed a venue change and agreed to set a location with a neutral decision. Then, ACC concluded hosting Asia cup 2020 in Sri Lanka. But because of Sri Lanka’s economic crisis, it’s impossible to hold the match. That is why the Asia cricket council has decided to hold this match again in the UAE.

Because of Covid-19, it was impossible to hold this match, which is why ACC keeps postponing the match dates. After 2 years, this match is finally going to play in the land of UAE in August-September 2022.

Asia cup matches are one of the most important matches in Asian cricket. If you are also eagerly waiting for this match, then read this article till the end and get complete information related to this match.

Asia Cup 2022 Schedule ACC has finally announced the Asia Cup 2022 schedule. The Asia cup was first time played in the year 1984. Now, all the participating teams will face each other in the venue fixed by the Asian Cricket council.

Recently, the Asia cup was held in the year 2018 in the United Arab Emirates (UAE). This match was one of the most fantastic matches for the Indian team. The Indian team won this Asia Cup 2018 without losing a single match.

Shikhar Dhawan, an Indian cricket player, was declared Man of the match for the Asia cup 2018. Now, in Asia cup 2022, there are a total of five prominent teams who have qualified to take part in this match.

Below I have provided a table of Asia cup 2022 fixtures. Through this table, you can get an idea of when the matches will be played. The first match is India vs Sri Lanka on August 27, 2022, and as decided, this match will be played in UAE.

There is continuity in other matches; only after Bangladesh vs qualifier match will there be a gap of 1 day, and after that, the matches will continue till the final and last match. Asia Cup 2022 Schedule

The cricket fans of both nations are eagerly waiting for the India vs Pakistan match. Recently the Asia Cricket Council officially announced that the India Vs Pakistan match would be held on August 28, 2022.

This is the official date of India vs Pakistan Asia cup 2022 match. This match will be played in Dubai International Cricket Stadium, Dubai. The time of the match is 7.30 PM.

Cricket lovers from both nations will be able to see this amazing match between India vs Pakistan on August 28, 2022. This is the official date; if the date changes, then you will be notified through ACC’s official Twitter account.

Those five teams, India, Pakistan, Sri Lanka, Bangladesh, and Afghanistan, are qualified, and the sixth team will be decided by a qualifier match held in Sri Lanka. In this match, there will be the participation of 4 cricket teams from different regions.

Whoever wins from the eastern region has to play a final match with the team who has won from the western region. The team winning this match will be finalized as Asia Cup 2022 sixth and final team. This qualification match started on August 20, 2022, in Sri Lanka.

There is no official announcement but it is assumed that there will be 12 matches in Asia Cup 2022.